This time was different 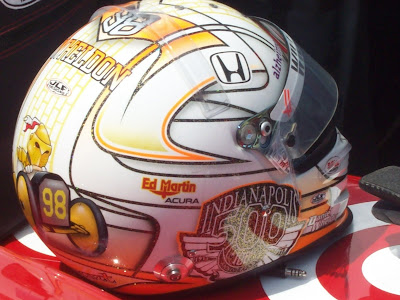 Close to home - racing touches many of us. (toomuchracing.com)

It is around 48 hours after the tragedy of the Las Vegas 300 and I’m going to share a few of my own thoughts along with links to some lovely tributes and images of Dan Wheldon.

I’ll start by applauding the power of the internet. I’ve been watching racing my whole life so inevitably I’ve seen some terrible accidents. My parents were long ago bitten by the same bug so back in the days when we lived together we could talk things out when a bad accident happened.

We were eating dinner when Senna’s death was confirmed on the news. We sat on our sofa and spotted the giant Stars and Stripes being lowered as the cars continued to race at Fontana in 1999. We were actually there at Daytona in 2001. This time around was different though.

In the online age the word community is shifting its meaning. No longer simply a description of people who physically live in close proximity with one another, instead a community can be groups of thousands whose only common denominator is a shared passion and access to the web. For us that passion is racing, just as it was for Dan.

As the tears started to clear I came to realise that this little box of wires and silicon was connecting me to the most intimate and intense statements from others who shared my love. Sometimes they vocalised what I couldn’t, sometimes they offered memories as a comfort. Others shared news, nothing but the facts mind you, there was no tittle-tattle in my timeline; I discovered that those I follow on twitter are a good bunch. In the thousands of messages that expressed shock, sadness and affection I never saw a single unfounded rumour or tasteless statement. Not one.

It was a dignified collective response to surreal events that surprised even somebody like myself who has witnessed thousands upon thousands of races across almost all disciplines. To my eyes it was the single most violent accident I had seen; the sight of multiple cars flying through the air like darts disturbed me in an instant, my much-better half rushing to comfort me within seconds as I was already shook up by what I’d seen. As she left for bed I was alone, save for a snoring dog, in a dark room. A problem shared is a problem halved, not that this is really my problem, but like many of you I invest a lot of passion into motorsport and feel a part of its community even though I was sat thousands of miles away vainly hoping that a man I’ve only seen in the flesh a few times would pull through. The sense of loss was tangible even at this great distance, the look on Dario and Tony’s faces as they realised their friend’s fate was too much to bear.

It was the online race fans that offered me nearly as much comfort and insight as my own family had during similar Sundays past. I’m grateful. These are people who know what May the first means or why a racing driver is honoured to carry the number 27. These fans fall silent on lap three at Daytona, they trek into the woods surrounding Hockenheim to show their respect. They don’t just know who is on the grid, they know who is missing from it too.

Then came the mass media reaction. While the specialist press told the story with class and precision the wider world of journalism showed questionable taste, little knowledge and the kind of amateur-hour scrutiny that makes me doubt just how much they know about their staples of politics, war and crime. I won’t name and shame as this isn’t the time, but suffice to say that I now know which papers to read and channels to watch. There were notable  exceptions, but back in his home country the lack of understanding about Dan Wheldon and his chosen profession was profound. A shame, if not a surprise.

Amongst the many tributes shared over these dark days were a few that moved me to tears and even the odd one that briefly brought back a smile, here are a few for you to read if you haven’t done so already. The obvious ones are from Marshall Pruett and Robin Miller, two very personal and touching accounts. Roy Hobbson offers an ‘inside-out’ perspective from a man who finds himself in the paddock but for whom it took a tragedy to enlighten him about something that previously left him puzzled – the good-nature that I’m proud to say is the bedrock of our sport.

Meesh Beer was on fine form, Joe Saward showed the restraint that the tabloids couldn’t and all the recent posts on popoffvalve.com are worth reading. The picture above is courtesy of toomuchracing.com where you will also find another considered and reflective post. Even if the photo was taken at Goodwood, it neatly illustrates how close the Indycar paddock will let you get to its stars, something that amplifies the occasional losses it suffers.

There are many more of course, feel free to share yours or your favourites with me. Other heart-warming and heartbreaking images and insight have also emerged since Sunday. As predicted by Robin Miller, Dan Wheldon had signed a contract to return to the team that brought him the most success. Greg Moore’s father Ric was at Las Vegas for what has been said to be his first trip to a race since his son was lost. And the most poignant of all, Dan and his wife had matching tattoos done just before the fateful race.

Another lasting tribute that was called for by James Hinchcliffe and thousands more will be that the 2012 Dallara Indycar will carry Dan Wheldon’s name. This stronger, safer and more advanced machine will carry the hopes and dreams of those who wish to follow in Dan’s footsteps over the coming years. It was Wheldon who led its development from the driver’s seat, what a shame that he will never see it race.

Of all the lovely images shared over the past couple of days it is this one that moved me the most. Probably the two greatest motivations in Dan Wheldon’s cruelly short life are there to see.

5 responses to “This time was different”